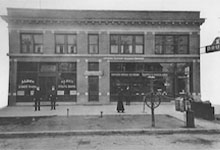 The Alden State Bank opened for business on October 5, 1916, in rented quarters in the building at 13205 Broadway, at the corner of Exchange Street and now the home of Alden Pharmacy. The establishment of the bank was the result of several local people who felt the need for a financial institution that would meet the needs of a growing Alden community. At this time, commerce was surging forward, largely due to business generated by the Black Water Baths, where people from all over Western New York would arrive by rail or by car to immerse themselves in the black-colored mineral water for relief of various ailments. Charles H. Dold was the bank’s first President. 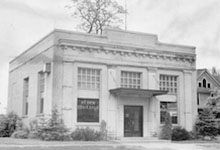 As the Alden community continued to grow, the bank grew as well, and soon the need for a new building became apparent. In 1924, construction began on a new brick structure across the street from the bank’s original location. The project was completed the following year. That building, now the office of the Alden Advertiser at 13200 Broadway, provided customers with every modern convenience and device to facilitate prompt and efficient service. There were three teller stations, offices, a posting room and a convenient coupon room. 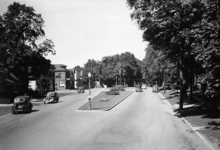 Sound management practices enabled Alden State Bank to weather the Great Depression and continue to serve the community. The bank continued to grow during the 1940s and ‘50s, with total assets reaching over $10 million as the Bank celebrated its 50th anniversary. Bernis L. Bensley served as Bank President from 1925 to 1950 and upon his retirement, Albert L. Simme was named President. 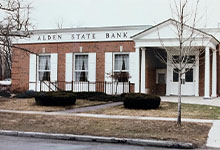 Eventually, along with continued community growth, came the need for still more space. In 1960, plans were made for a new building. In November 1963, all of the bank’s operations were moved to the completed building at 13216 Broadway. A drive-thru teller and more teller stations were added. By the mid 1970’s, even this building had become so crowded that the basement was finished to house the bookkeeping and computer operations departments. Charles A. Marks was named President at the end of 1961 upon Mr. Simme’s retirement. He served as President until his retirement in 1979, when Christian G. Koelbl Jr. was named President. Mr. Koelbl served as President until his retirement from day-to-day operations in 1990. 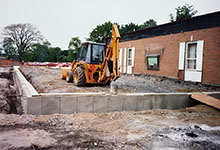 By the late 1980s, the bank once again felt the need for additional space in order to continue to give the quality of personal service desired. Ground was broken in May 1992 on a 6,500 square foot addition and remodeling. A grand opening was held in March 1993. The lobby was remodeled and an additional drive-thru window was added. The remodeled bank established an additional drive-thru window and nine offices for customer service, instead of the two which were previously available. The lobby was again remodeled and additional office space was added in 2013. Richard D. Koelbl, who began at the Bank in 1973, was named President and CEO at the end of 1990 and served as President and CEO until the end of 2017. Mr. Koelbl remains in an active role as the Bank’s Chairman of the Board. 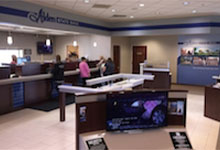 To better serve our customers in a rapidly growing Lancaster community, Alden State Bank built its second location at 5802 Broadway. The 3,000 square foot office opened its doors in March 1995 and held a grand opening in May. In 2015, the lobby was remodeled to bring to our customers a modern and comfortable community banking experience. On January 1, 2018, Steven J. Woodard assumed the position of President and CEO.  He has been with the Bank for over 30 years. In November 2021, a third branch office was opened at 6545 Transit Road in East Amherst, allowing the bank to serve our customers in the northtowns. 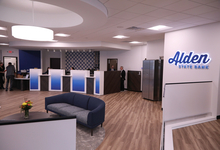 The bank was founded to meet the needs of the community. With that philosophy in mind, Alden State Bank has invested in Alden schools, the fire department and purchased issues of local municipalities. Assets have grown from $78 thousand in 1916 to $443 million at the end of 2021. This success can be attributed to sound management and financial practices and to the loyalty of its customers. We hope that Alden is proud of its home-town bank and we thank the community for its support over the past century. To experience the kind of unique service a community bank provides, we invite you to make the switch to Alden State Bank!

GET TO KNOW US